​Gracious, glamorous Myra Marlowe, fed up with fame after a very long career as a television actress, retreats to the small town of Beaver Haven, Vermont, planning to live quietly and anonymously, write her juicy autobiography, and grow her own tomatoes. The complaints of her faithful agent and less faithful lover, Tom Lamont, that she is throwing herself away on a backwards backwater of a town, fall on deaf ears, until she gets to know her neighbors: Reba and Cora, the Hospitality Ladies, full of rapid fire gossip and rapid fire questions; woodcutter Piney, impressively bearded and smelling of the great outdoors, who terrifies his victims with the force of his sales pitch, and Willa Mae Wilcox, the widow woman with the purple shutters on her house, who put a voodoo curse on her husband. With these colorful characters inviting themselves over at every hour of the day, Myra gets no time to write, and in frustration, invents a dangerous, mentally disturbed sister -- based on her first, best-known TV role, Sis Sadie -- to frighten away her neighbors and give her some peace and quiet. However, the upstanding citizens of Beaver Haven react in unexpected ways to Sadie’s shrill, childlike charms and sad plight, and before her charade is over, Myra finds herself accused of murder! A Bad Year for Tomatoes, John Patrick’s ridiculously clever comedy, with brisk and uproarious dialogue and sharply comedic characters, is a delight for actors and audiences alike.
Murder Me, Murder Me Not
​By William Springer
Directed by Molly Thorn
November 10-13, 2022 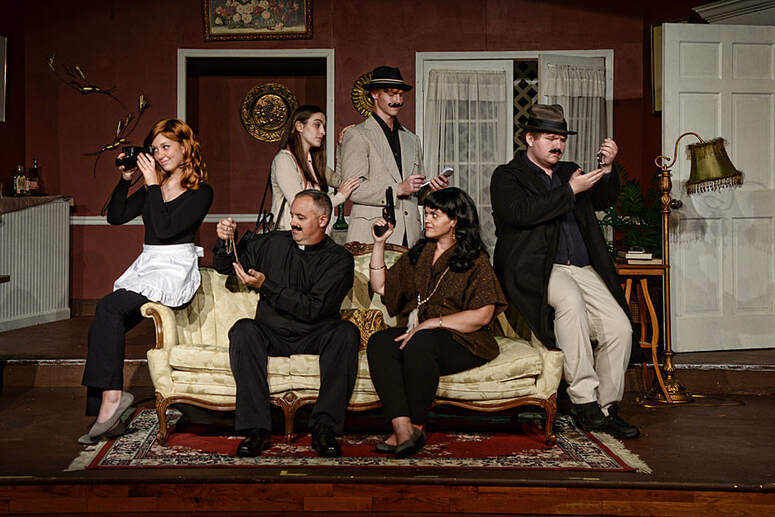 The Bay Tree Council for the Performing Arts in Red Bay, AL announces their 2022-2023 season! The first production, Murder Me, Murder Me Not by William Springer, will be November 10-13, 2022; their dinner theater production, A Bad Year for Tomatoes by John Patrick, will be February 9-12, 2023; and the third and final production of the season, Doublewide, Texas by Nicholas Hope, Jessie Jones, and Jamie Wooten, will be April 27-30, 2023.
© COPYRIGHT 2022. ALL RIGHTS RESERVED.